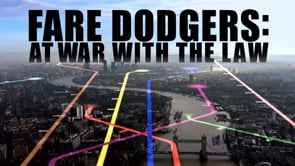 Fare Dodgers: At War with the Law

London’s public transport system is one of the largest and busiest in the world. Every single day 11 million people use a bus or train to travel through the city, but not all of them are paying their way.

An estimated 125,000 fare-dodgers try to get away without paying every day, swindling the system out of more than £100 million a year.

With special access to Transport for London’s Revenue Protection teams, Fare Dodgers: At War With The Law tells the stories of the frontline enforcement officers and undercover investigators fighting back in London’s fare-dodging war.